Born and raised in Jamaica, I emigrated to the United States as a young woman in pursuit of a college education. Attempting to combine my love of science, art and working with my hands, I received a baccalaureate in Horticulture with an emphasis in Plant Breeding from Penn State. I then continued my studies in Plant Science at UConn before spending several years in the horticulture industry. Currently, I am a licensed Massage Therapist and I have been practicing for 14 years. I have always been interested in the arts, so in my spare time I began designing and making jewelry. Working from a home studio, my first pieces consisted of fused glass accented with beads and crystals which were finished by wire-wrapping and other cold connection methods. I expanded my skill set and continued to develop my craft by taking metalsmithing classes at Wesleyan Potters. Frequently, I found it was the raw materials that inspired my design for a particular piece. I like using texture for contrast in my jewelry work. I discovered my love of pottery passing through the ceramics studio at Wesleyan Potters while on my way to attend metalsmithing classes. I saw pottery students ‘playing’ with clay and making wonderful pieces. I was completely mesmerized by the students throwing on the wheel and making diverse forms from simple lumps of clay. With the encouragement of a fellow student, I decided to try my hands at pottery as well. I like throwing at the wheel, preferring to create simple utilitarian pottery with glazes applied by spraying. Pottery and Jewelry are my primary and secondary crafts respectively at Wesleyan Potters. 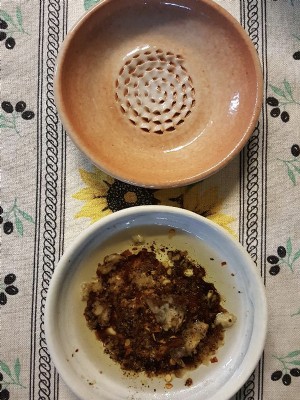